One of DesignHammer’s core values is healthy living. Life in the CoVID-19 world is a challenge for many, so to help encourage our team members along their wellness and fitness journeys, we turned to gamification.

Several members of our team joined The Conquerer fitness challenge via My Virtual Mission, a mashup of Google Maps and a fitness tracker that maps a path along iconic trails. Mix in a dash of marketing charm, including fancy finisher medals and virtual postcards, and it is hard to resist the urge to stay physically active.

Follow along with our journey, as we walk, run, bike. swim, and anything else the system will convert into miles traveled. If you want to follow along with Team DesignHammer, use our team link for 10% off the registration price. 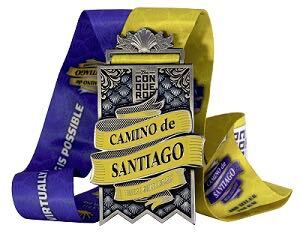 Our current fitness challenge will take us on a virtual walk for 480 miles along The Pilgrims’ Way from the French border to the shrine of the apostle Saint James the Great in the Cathedral of Santiago de Compostela in Spain. Follow below for our weekly updates as we travel virtually along the north of Spain westward toward the Atlantic coast. We hope to complete this challenge in 6–8 weeks as we use a relay format in which we hope to average 10–12 miles per day. 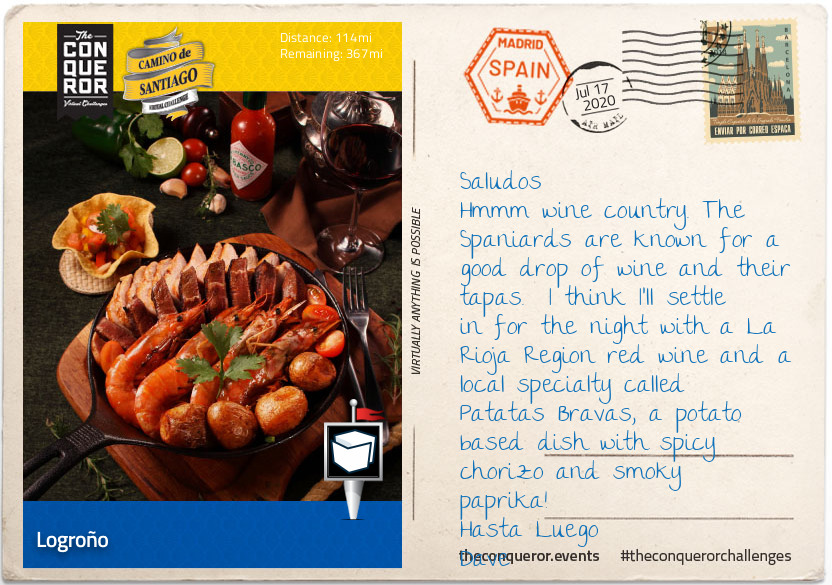 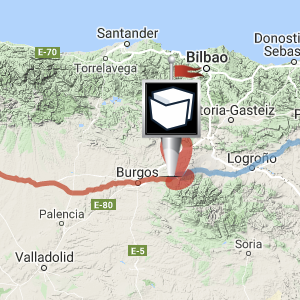 The DesignHammer team has completed more than 30-percent of our fitness challenge, but while the temperature along our virtual trail at this time of year tends to be a delightful 72° with a 76% humidity, the same cannot be said for our physical fitness journey. Currently, our area is battling temperatures rising upwards of 110° with the heat index, and with gyms still being closed, our training has taken a hit. The journey must proceed, however, and at least this week's virtual hike takes us through the province of La Rioja and the city of Logro, known for — you guessed it — Rioja wine.

Rioja wine has the D.O.Ca (Qualified Designation of Origin" distinction, the highest category in Spanish wine regulation. Traditionally it is made of a combination of seven grapes grown in the region: Tempranillo, Garnacha Tinta, Mazuelo, Graciano, Viura, Malvasia, and Garnacha Blanca. The climate of the area combined with the closeness to the river Ebro makes for rich and fertile soil for grape production. The mass availability of such great wine and produce boosts the tourism economy of Logroño, most famously Laurel Street - the famed Path of Elephants, with more than 60 hotels, tapas bars, and restaurants every two meters.

Hopefully more manageable local weather will up our mileage next week as we travel towards the autonomous community of Castile and León. 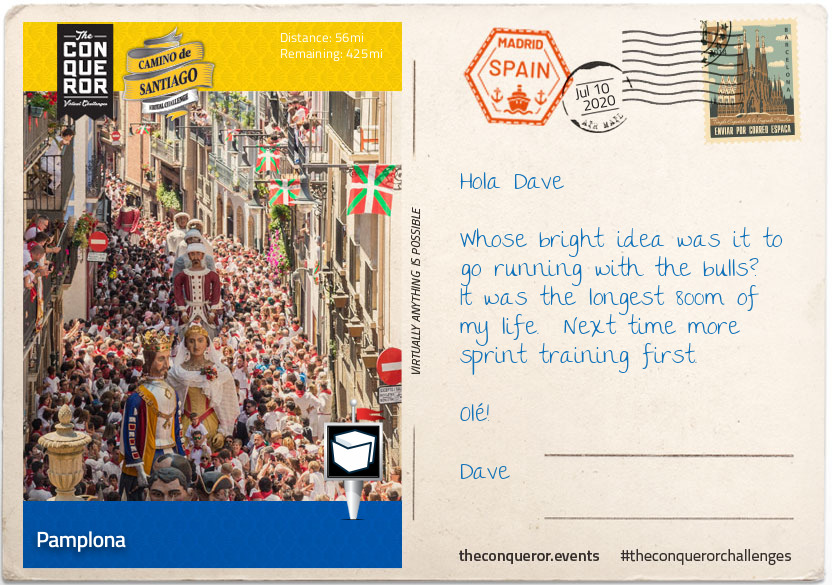 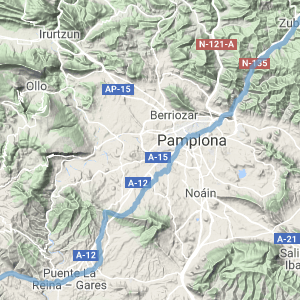 This week our virtual journey took us through Pamplona, famed for the annual running of the bulls. Coincidentally, the bull run is part of the San Fermin festival held each year between July 8-14. Our virtual team would have run with the bulls, but the festival has been canceled due to the COVID-19 pandemic.

Pamplona is the capital city of the Navarre region that we’ve been traveling through since our entry into Spain in week one. It sits across the Arga River and is the main commercial hub of the region due to the river, and its ease of access to San Sebastian, Bilbao, Paris, and Madrid. The settlement of Pompaelo was founded in 74 BC as a camp for the General Pompey the Great, who played a significant role in establishing the Roman Empire. Architecturally the city is a blend of historically notable gothic churches (the most notable being the fourteenth-century Gothic Cathedral of Saint Mary the Royal), medieval military structures, and civilian Baroque and Romanesque buildings.

The climate in Pamplona is very mild, with an average temperature of 55 degrees with very little rain and humidity. This promotes fertile soil that allows farmers in the area to produce lamb, beef, foie gras, nutty, buttery cheeses like Idiazabal, and more. Much like the rest of the Navarre region, indigenous grapes include Tempranillo, Garancha, and Viura. Because of the abundance of local food and drink options, Pamplona boasts three Michelin-rated restaurants, Rodero, Europa, and El Molino de Urdaniz. Based on the look of the stone-built restaurant and its two Michelin stars, this author would likely choose the latter!

Culturally, much like the Full Frame Documentary Festival held in our hometown of Durham, NC, Pamplona hosts one of Spain’s most important film festivals - the Punto de Vista International Documentary Film Festival each March. Pamplona has also been immortalized in literature by Ernest Hemmingway, who featured Cafe Iruna in his first novel, The Sun Also Rises, and spent time living in the city in the 1920’s. Athletically, the city is home to mid-table La Liga side Osasuna football club, and is the hometown of 5-time Tour de France winner Miguel Indurain. 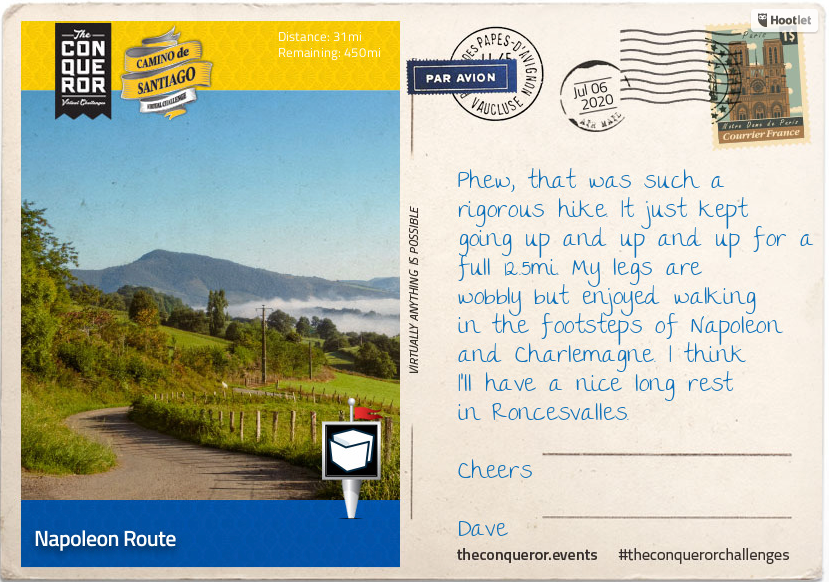 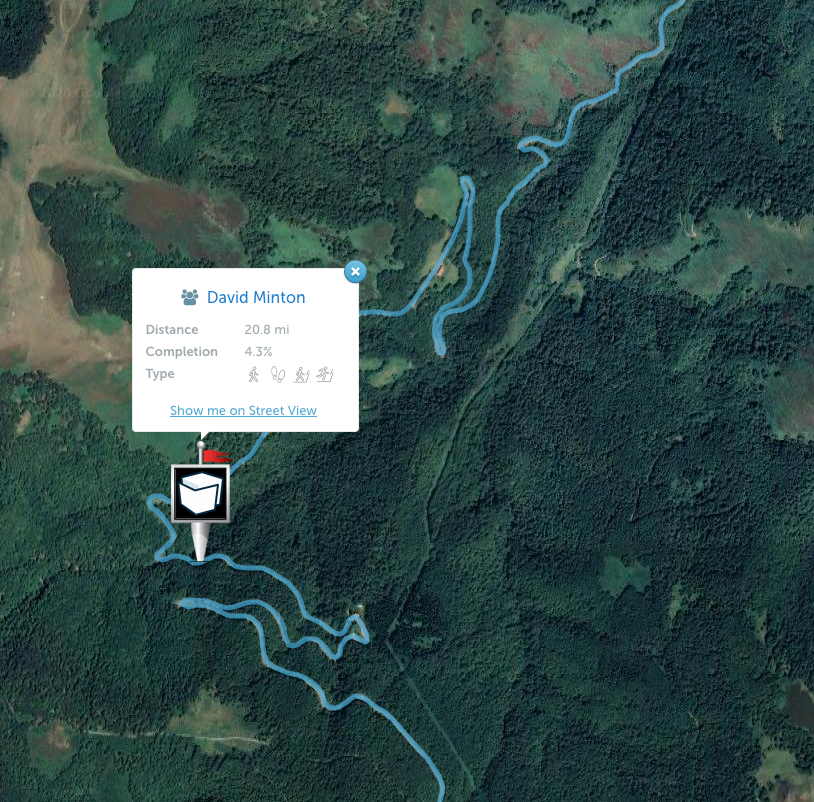 The team has started our virtual journey from Saint-Jean-Pied-Port near the French border with Spain. This week we are making the long trek through the Pyrennes mountains and the Basque town of Luzaide/Valcarlos in the autonomous community of Navarre, Spain. Currently, we are on the Napoleon Route, which was a strategic passage to Spain during the Napoleonic Wars. 1,000 years prior, Charlemagne is thought to have made the arduous trek across the mountain range in his quest for continental supremacy.

Politically the region is interesting because of its close proximity and shared traditions to the Basque Autonomous Community, which has long sought independence from Spain. Culturally Navarre is a blend of Basque traditions, migrants from points further east over the Pyrennes and Mediterranean influences from the Ebro River.

Agriculturally, the soil is rich for wheat, vegetables, olive trees, and of course wine grapes. The traditional wine historically has been rosado (or Rosé). Historically grapes have been grown and wine produced since the ancient Roman times around the 2nd century BC. Viticulture is the main agricultural product in the region, and today you can find most of the popular grapes of the Basque region, including Tempranillo, Pino Noir, Granacha Tinta, Savignon Blanc, Garnatxa Blanca, and Malvasia, to name a few.