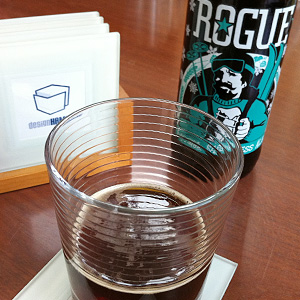 Every Friday at DesignHammer, we take time after a long day of designing cutting edge websites to sit down and have a gourmet beer tasting. This week Frank selected Rogue’s Mogul Madness Ale for us to sample. Mogul Madness Ale is a winter ale first brewed in 1991.

“Small batches of seasonal beers were traditionally brewed in Europe during the 19th century. Breweries made darker brews, brews with high alcohol content and festive taste. Mogul is a strong ale, darker in color than other pale ales. Hoppy, caramel aroma, dark burgundy in color with an off white head. Intense flavors of citrus hops, and complex notes of nuts, berries and mocha. It finishes long and lingers for at least 15 seconds.”

Rogue crafts a variety of ales, porters, stouts, lagers, and spirits each with a their own unique innovative character. Rogue beers and spirits have won recognition across the globe for their quality, innovation, and craft. “Tastes like an IPA,” Frank decided after a first sip. Jay agreed and noted, “Tastes like one, but doesn't smell like one.” “I think this is one of the better IPAs I've had.” Jay judged. “Even if,” David pointed out, “It's not an IPA.” “I wouldn't drink this beer while skiing.” Jay decided. “Because of the ergonomics?” David asked. “No, it's not a cold weather beer. The beer for cold weather is a stout.” according the Jay. DesignHammer frequents the Hope Valley Bottle Shop, a local specialty shop near DesignHammer’s world headquarters in southwest Durham. Check out their extensive selection of carefully chosen wine and beer. Tell them DesignHammer sent you.