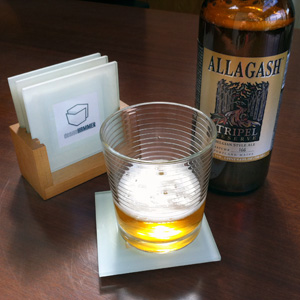 Every Friday at DesignHammer, we take time after a long day of designing cutting edge websites to sit down and have a gourmet beer tasting. This week Stephen selected Allagash’s Tripel Reserve for us to sample. Tripel Reserve is a Belgian style Ale in the Classic Allagash series.

“This golden hued ale is marked by passion fruit and herbal notes in the aroma, with subtle suggestions of banana and honey surfacing from its deep and complex palate. The Tripel's finish is remarkably long and soothing.”

Allagash Brewing Company sold its first batch of beer in the summer of 1995 in the maritime city of Portland, Maine. From the very beginning, Allagash has strived to produce the finest Belgian-style and experimental ales on this side of the Atlantic. Following the time-tested brewing traditions of ancient Belgium, Allagash now produces a broad-ranging portfolio of artisanal beers with uncompromising quality. Kosta led off with the smell test, “Smells nice.” Kosta grinned. After a sip, Paul weighed in, “It's good. I like it.” “I can see through it,” Paul noted, moving on to the look test. David almost agreed, “I can kind of see through it.” “I can't see Paul trough it,” Kosta joked. After a few more sips and some reflection, David offered, “I thought it would be sweeter.” “I like it. It's fruity without being too sweet.” Stephen decided. “Kind of banana,” David agreed. Jay and Frank joined the tasting, already in progress. After his first sip, Jay was perplexed. “I don't know the name for what I'm tasting. It's not hops. It's more of a round flavor.” The rest of the tasters waited for some clarification. “It has some champaign-like notes, but not in a good way.” Jay decided to come down against the Tripel. After Frank's taste, Frank agreed. This may be the first time Jay and Frank agreed during a DesignHammer beer tasting. DesignHammer frequents the Hope Valley Bottle Shop, a local specialty shop near DesignHammer’s world headquarters in southwest Durham. Check out their extensive selection of carefully chosen wine and beer. Tell them DesignHammer sent you.