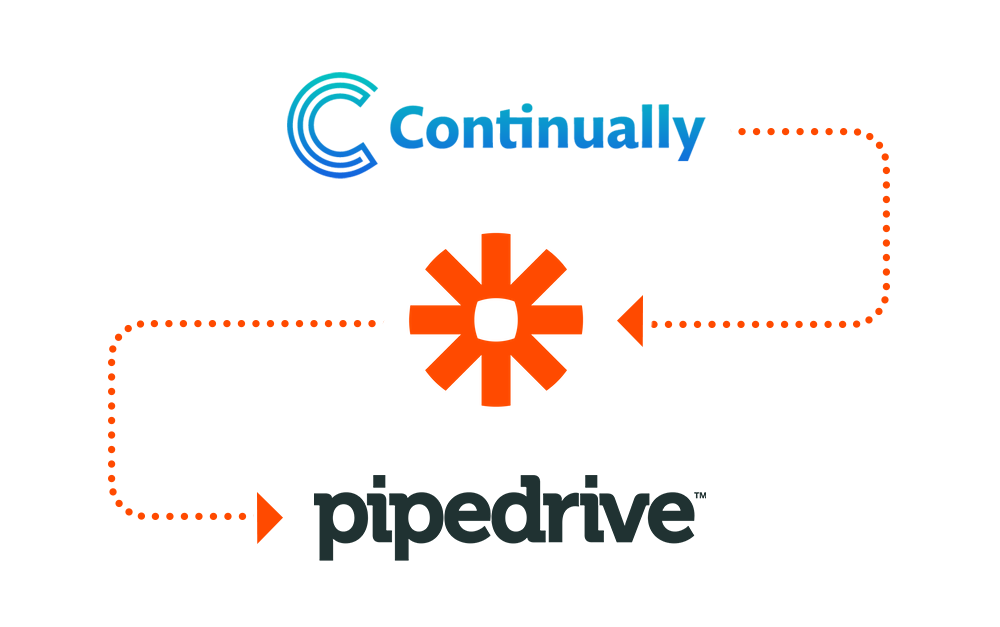 This past summer I set out to work on building out a chatbot for our new website which will be launching in the near future. We wanted an automated way to direct visitors to site content that they might be interested in reading, one that offered optional live chat via Slack, and most importantly, doubled as a lead capturing solution. I had no experience in building chatbots so I did some research to find out which services were code-free, flexible, easy-to-use, cost-effective, and integratable with internal tools we use such as Slack, Pipedrive, and Mailchimp.

My research yielded a few viable automation solutions, with the top three being Leadformly (3rd place), DriftBot (2nd Place), and at the very top of the list Continually — the solution I ended up selecting for a number of reasons, but mainly because it checked off every single box on our requirements list.

After building out the entire chatbot conversation workflow, I can now happily say that choosing Continually as an automation solution was the correct option, and here’s why:

To function as a lead capturing solution, it was important that the chatbot service we selected integrated with our chosen sales management software, Pipedrive. Pipedrive is a cloud-based CRM tool for salespeople who require simplified sales management and automation. There were a few automation solutions that integrated with Pipedrive directly, but we passed on them in favor of Continually, for a couple of reasons. For one, it met every single one of our other desired specifications, and most importantly, because Continually’s “Essentials Package” offered a Zapier integration.

For those unfamiliar with the service, Zapier is an online automation tool that connects 2,000+ web applications via a user-created workflow that tells one app when and what to communicate to another app. To our fortune, Zapier connects Continually chatbot data with Pipedrive. The starter Zapier plan costs $20/mo and allows for 750 tasks, which we felt is more than enough to capture lead information from the chatbot and pull it into Pipedrive. Our agency doesn’t anticipate that more than 750 site visitors will be interacting with the chatbot every month to the length of actually initiating the lead capture stage of the conversation workflow, so the Essentials Plan works out nicely for our purposes.

One downside was that connecting Continually with Pipedrive via Zapier didn’t seem to be a common automation, so there were very few online resources instructing users on how to build out a proper workflow between the two applications. Thankfully, I did the legwork to figure out the most effective way to utilize Zapier to pull information from chatbot conversations and send that data into Pipedrive automatically. I felt it necessary to write an article on this because building out this particular workflow was not as cut-and-dry that Zapier (or Continually) makes it out to be.

Before I get into the full Zapier configuration tutorial, let's quickly go over what NOT to do.

I initiated our Zapier subscription under their free plan until I realized that the free plan limits users to single-step zaps. Single-step zaps are great when you only need to complete simple automations, like forwarding a new Pipedrive contact’s email address to your Mailchimp email subscription list. Unfortunately, building out a Continually/Pipedrive integration is far more complex and requires at least one multi-step zap.

My original solution was not to import data from Continually directly into Pipedrive, but rather to pull data into Pipedrive as a pre-configured Google Sheet connected to the chatbot was updated in real-time. It takes a bit of time for Continually to “conclude” a conversation session, usually due to several minutes of inactivity, so I was hoping I could create a faster automation through Google Sheets.

In this first attempt, I set Zapier up to create a new person in Pipedrive the minute the cell that contained “name” information was populated in the Google Sheet. Then once their organization was populated into the Google Sheet, Zapier would create a new organization in Pipedrive. The same process would then be repeated for additional information collected in each unique variable cell I had configured, which would then be pulled in to create a “Note” or “Activity” in Pipedrive. Simple right? Wrong!.

Unfortunately, Zapier has a 3-minute lag time between triggers, so my initial attempt with Google Sheets ended up triggering a lag-related error feedback loop. Basically, Zapier’s first trigger would attempt to create an organization in Pipedrive, then the second trigger would try to create a new contact and assign that contact to the new organization they provided. Due to the lag time that it takes Zapier to create a new organization in Pipedrive, there were errors trying to connect a new contact to that organization — because at the moment that second trigger fired, the organization didn’t exist yet. The same thing happened in my next steps of the funnel as I tried to tag a new activity and note, to a person and/or organization that didn’t exist yet. Zapier recognizes these errors when they happen and emails you a number of warnings to notify that something isn’t firing correctly. 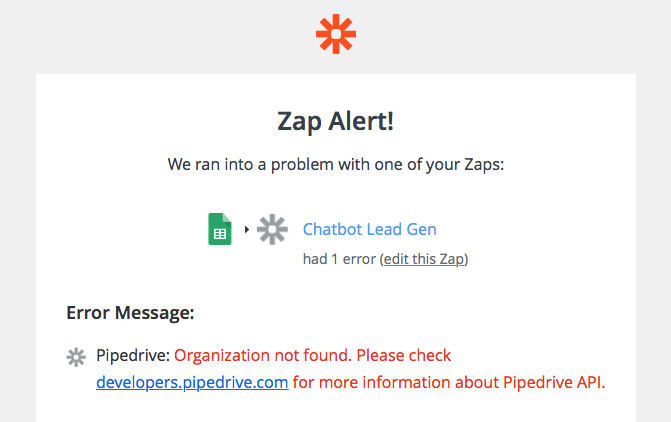 Even if you tried this same multi-step approach by pulling ALL Continually data through Zapier (which is an integration option), rather than pulling individual answers in one-by-one from Google Sheets, this same lag-related error will occur. After trying and failing a number of times, receiving 20+ error notification emails I was stumped, but I was also determined to find a workaround – so I did.

Check out my workaround below in Part 3!


How to Bypass Zapier's Lag Limitations

By taking advantage of Zapier’s ability to connect to both Google Sheets and Continually, we can bypass the automation lag.

Create a Zap to pull the company name in from Google Sheets and create a new organization in Pipedrive immediately as it updates in real-time (this will account for lag).

Remember to take note of the newly-created Organization ID, after running a test zap you will find the Org ID here: 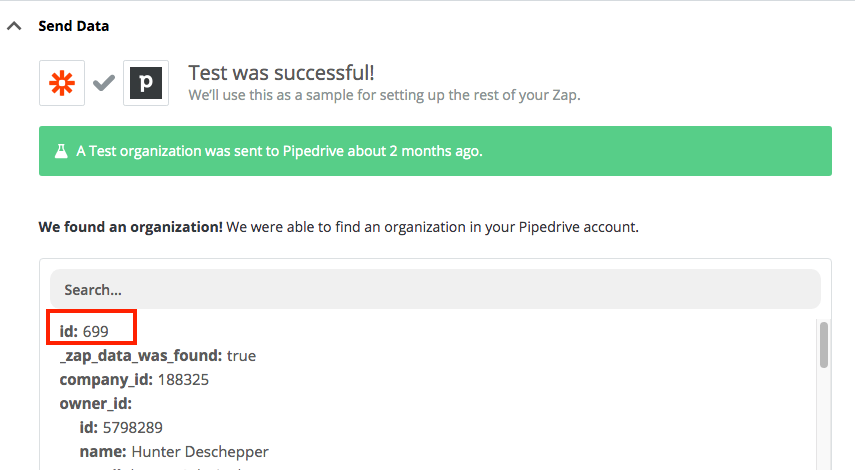 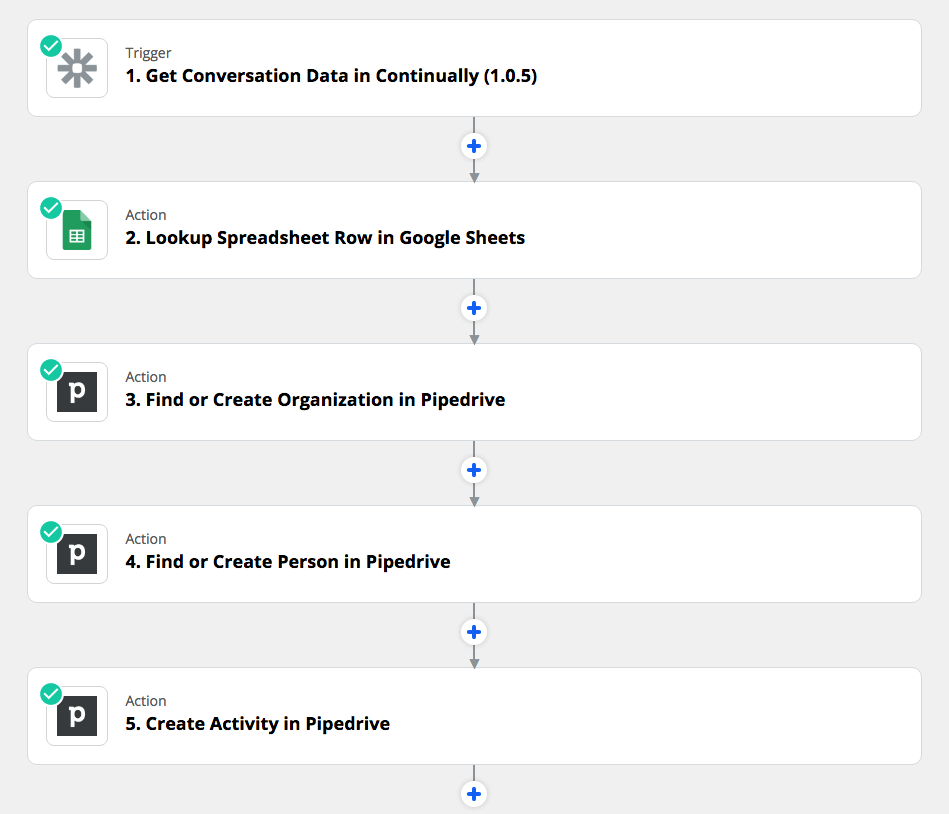 Step #1: "When this happens… [Get Conversation Data from Continually]" 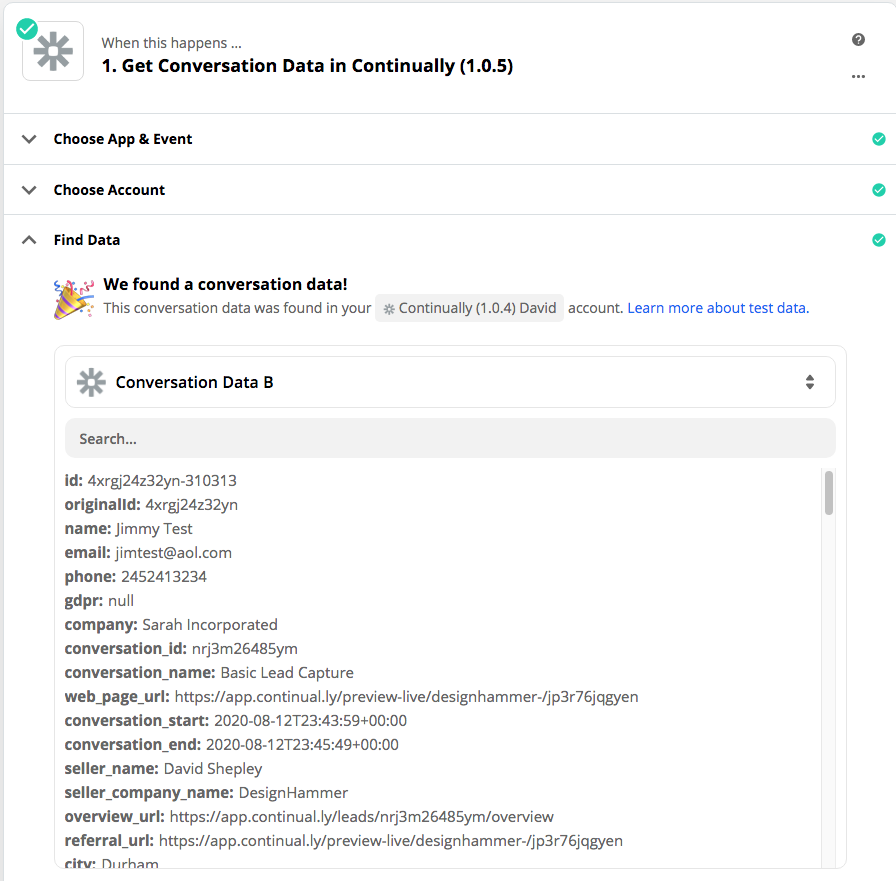 Step #2: "Do this: [Lookup Spreadsheet Row in Google Sheets]"

Now that the organization has been created in the first single-step zap, Zapier needs a data point to use in order to find the new Organization/Org ID in Pipedrive before you can create a new contact and attach them to the organization. Here's what to do next: 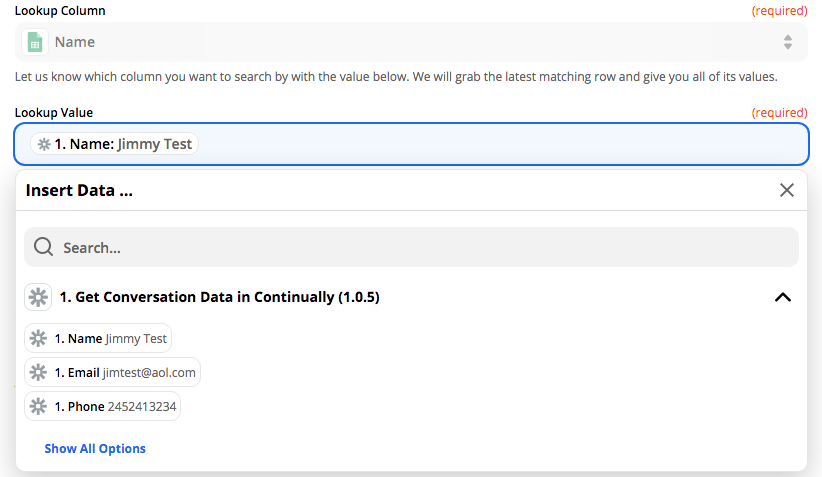 Step #3: "Do this… [Find or Create Organization in Pipedrive]"

Remember that the Organization needs to exist first within Pipedrive if we want to tie the new contact to that organization. Here's how to configure this step:


Step #4: "Do this: Find or Create Person in Pipedrive" 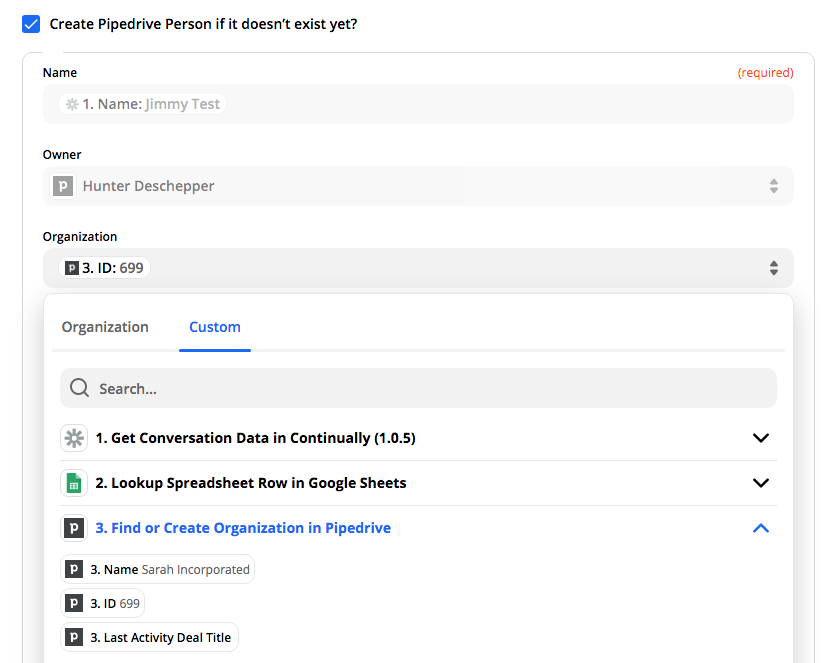 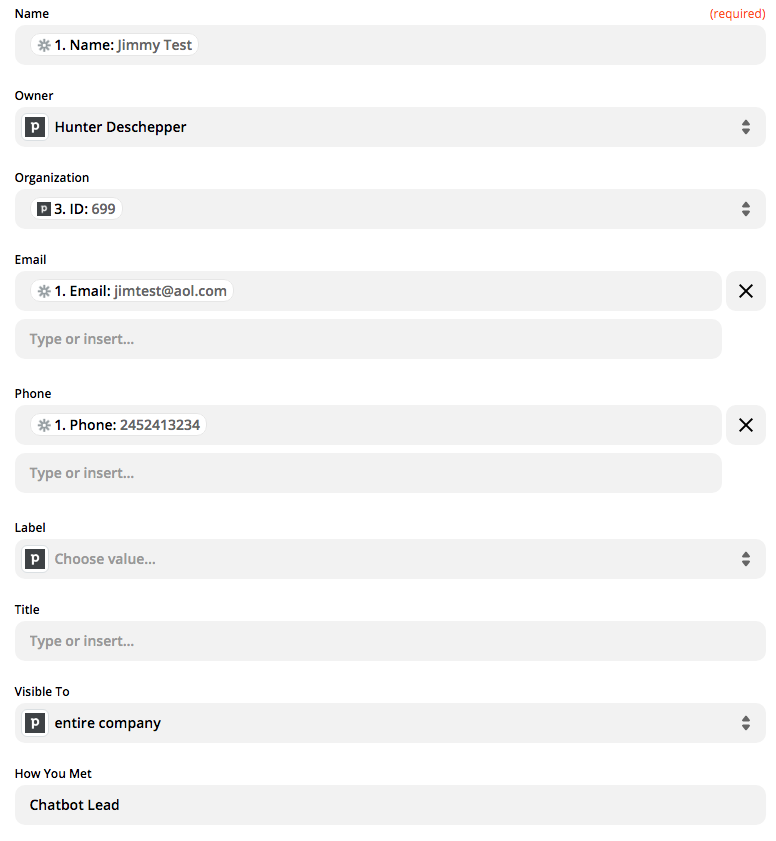 Step #5: "Do this… [Create Activity in Pipedrive]" (Recommended)

This is where you can use all of the important custom variable information you included in your chatbot and connect it to that person’s Pipedrive profile in the form of a note, as well as a task on your calendar to respond to them. 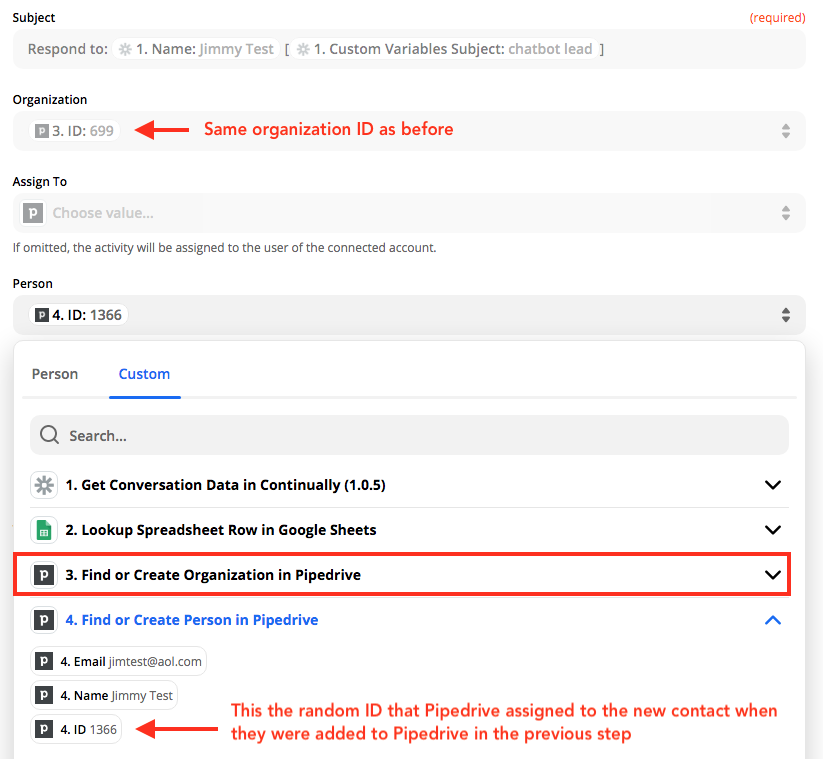 Most of these are custom variables that I have recorded from within the chatbot conversation. Your variables may look different depending on what questions you ask your site visitor. Here is the plain text version of my HTML note above:

A successful contact profile page connected to the correct organization with an activity note attached will look like this:

The note in your activity calendar will look like this:

I hope anyone stuck on this configuration has found my step-by-step instructions useful. If you have any questions or are stuck on any part of the instructions, leave a comment below!

Interested in adding a chat bot to your site?

We'd love to build you a custom bot!
Categories
Tags