Will your next cloud computing service be hosted from the bottom of the ocean?

“The cloud is just someone else’s computer,” as the joke goes. In truth, cloud computing covers the very specific, very large deployment of identical hardware filling data centers to allow systems to scale to be able to elastically provide on-demand service. The assumption, however, has always been the datacenters are somewhere, on land. But do they need to be?

For the last two years, Microsoft’s Project Natick team tested and monitored the performance and reliability of a capsulized datacenter, deployed 117 feet deep on the seafloor, off Scotland’s Orkney Islands.

More than half the world’s population lives within 120 miles of the coast, often where real-estate costs are very high. By locating undersea datacenters near heavily populated areas, data would have a shorter distance to travel, reducing latency, and improving user experience. The shorter distances would also put less stress on the Internet backbone’s principal data routes and core routers.

One of the greatest costs associated with datacenters is energy, and one of, if not the greatest use of energy is for cooling. The consistently cooler temperatures of water below 100 feet, coupled with heat-exchange plumbing, could greatly reduce the energy needs of undersea datacenters. In addition, coastal areas provide numerous options for renewable power, including wind turbines and tidal generators. Microsoft chose the Orkney Islands specifically for access to a 100% renewable power grid.

While Microsoft engineers were hoping for hardware reliability on parity with their land-based control servers, they were surprised that the failure rate was only one-eighth. They theorize one or more of three possibilities: the nitrogen atmosphere used for the pressure capsule was less corrosive (lacking the oxygen of earth’s atmosphere), more consistent temperature without the changes that can stress components, or lack of people that could bump or jostle racks during day-to-day operations.

One question unaddressed by Microsoft was, what if the undersea data center is in international, rather than sovereign territorial waters? What privacy laws would apply? Could subpoenas be issued to access stored data for civil or criminal lawsuits? Could we hire mermaids as system administrators? What data privacy issues would apply? Interesting questions I am sure will somehow be addressed before we see commercial undersea datacenters go mainstream.

In the end, requiring fewer servers due to improved reliability, coupled with lower power needs (with a near-zero carbon footprint for operations if renewable power is used), could offset some of the harm cloud computing is inflecting on the environment. We can only hope. 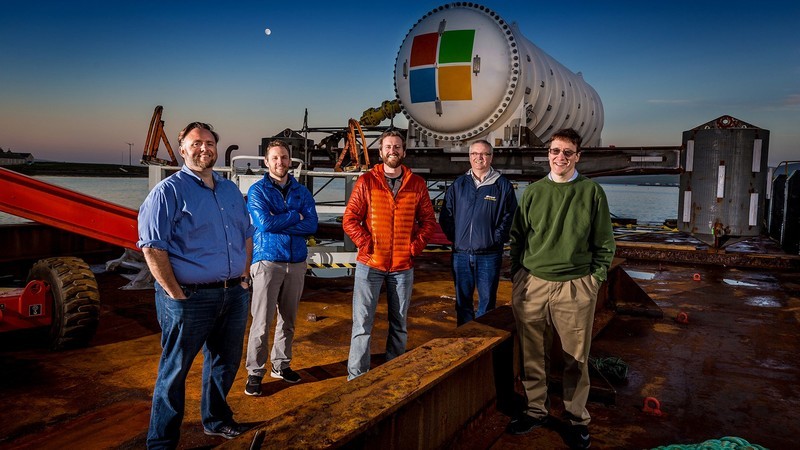 Microsoft’s Project Natick team gathers on a barge tied up to a dock in Scotland’s Orkney Islands in preparation to deploy the Northern Isles datacenter on the seafloor, in 2018. Photo by Scott Eklund/Red Box Pictures. Image Source: Microsoft Natick Press Kit

We've got you covered
Categories
Tags