While academics may cringe at the thought of using it for citations in research, due to the lack of fact checking and peer review (anyone can change nearly any of the listings), There is no question that Wikipedia is one of the most popular websites in the world, currently ranked as the seventh most visited by Internet tracking company Alexa, which ranks the web-based encyclopedia between the likes of Myspace.com and Facebook.com. According to Alexa, of all global Internet users measured by the company, over 8% of them visited wikkipedia.com over the last three months.

Since Wikipedia is so widely turned to, it would be very interesting to be able to see what people were reading, revealing the topics people are focusing on. Thanks to a new tool, currently in a closed beta, this statistical information will soon be readily available.

The new service is Wikirank, and according to Small Batch Inc., the site’s developers:

“It's a service that lets you explore what's popular on Wikipedia based on pageview data we're getting from the organization. We've been working on this for just over a month, exploring a lot of new technologies, and seeing how fast we can get a small but powerful experiment out into the world.”

The website’s home page provides trending data, as well as a list of the most read pages over the previous thirty days. 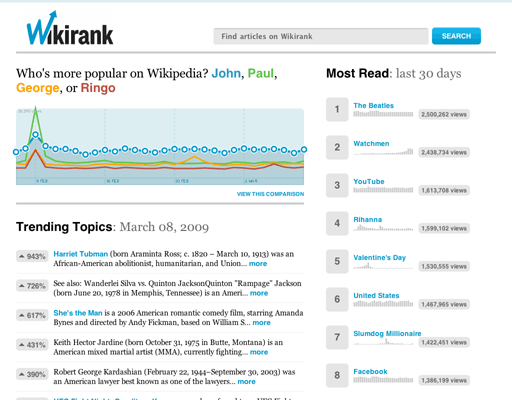 The tool gets interesting when you do searches, and spikes in traffic reveal heightened interest by Wikipedia users. A check on President Barack Obama reveals a huge, though understandable, spike around the time of his inauguration.

Also of interest is the ability to overlay graphs for multiple Wikipedia pages, such as this one for three versions of Windows. Looks like the page for the next release, currently in beta, is receiving over twice the attention of previous releases. 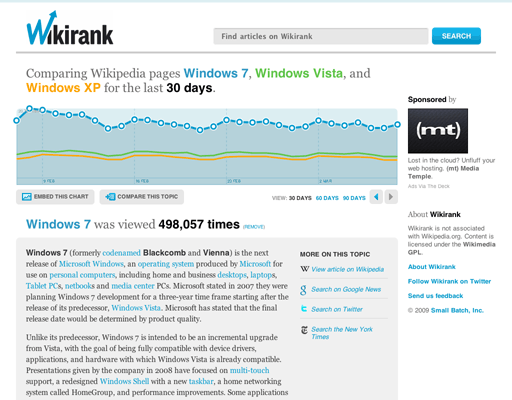 Once open to the public, Wikirank looks to be a very useful tool for gauging public interest in hot topics.